This is the post where I write about all the things that didn’t go into the other posts but are still saying, “include me!”

It looks as though we were never home except to sleep but even before the weather warmed up John had bought a charcoal barbecue for the backyard and was inviting some of my staff over for a meal. M, who used to drive me to school, recalls John attempting to cook steak with snowflakes falling on his head.  We had to move the whole thing to the carport to finish cooking.

Carol had a lovely garden and we enjoyed watching the flowers appear in the spring.  I can honestly say it was the best spring I had ever experienced.  Each new flower or bud that appeared was a welcome sign that one day it would be warm again.

Not far from where we lived was a stately home called Shugborough, belonging to the Earl of Lichfield.  We visited twice, once on our own and later with our friends from Australia, Michael and Adrian. Shugborough Hall is situated on the edge of Cannock Chase.  It was given to the National Trust in 1960 in lieu of death duties. Lord Lichfield retained an apartment in the Hall until his death in 2005, the year after we visited.  Apparently his apartment is now a gallery exhibiting some of his photographic works.

We enjoyed walking through the manicured gardens, admiring statues, watching wedding photos being taken, marvelling at the Morris dancers and exploring the canal and its interesting bridges.

A quick stop in Lichfield had our friends investigating the birthplace of Samuel Johnson and the home of Erasmus Darwin followed by tea in a 1550 tea house.  As keen history buffs they were delighted to walk across Bosworth Field where the last significant battle of the Wars of the Roses took place in the 15th Century.

John’s brother Jim called in for a short visit prior to our flight to Majorca.  We showed him Castle Ring on Cannock Chase. It is thought to have been occupied by an ancient Celtic tribe known as the Cornovi. Now it is a circular area of raised earthworks but interesting just the same. We walked across part of the Chase in the cool autumn air and fired up the barbie for dinner that night.  He treated us to lunch next day at a cosy inn near a canal but I’m still searching for its name and location.

The local Chase Sailing Club opened up in the spring and we were invited to take an Enterprise for a sail thanks to the efforts of Alan, the father of our exchange teacher. Chasewater is a reservoir created to feed the Wyrley and Essington Canal in 1797. Now the 90 hectare body of water is used for sailing, waterskiing and more recently paddleboarding.  We enjoyed our sail but were glad to get out of our wet clothes, have a hot shower and be dry and warm.  Although John was a keen sailor at home he didn’t take to sailing in England which might have been something to do with the weather.

We were also invited to a night of bowling at the sailing club. We attended with Carol’s parents but I was wondering how a bowling alley could be set up in a sailing club.  To my surprise there was only one wooden alley with ten skittles and three bowls.  They can be hired from the portable Skittle Alley Company in Dudley.  We each took a turn and to my relief I not only scored well but I won a box of chocolates.

Every weekend was a surprise.  I would come home on Friday night ready for a magical mystery tour.  John decided he wanted to find the head of the Thames.  It doesn’t have a fixed location as sometimes the springs dry up and the river begins further along its course.  A field to the north of the A433, Trewsbury Mead, has the highest located springs.  They were dry when we visited but that didn’t matter.  We sat on a style to eat our picnic lunch (too many cowpats on the ground) and ran for shelter in a sudden rainstorm, conveniently finding the Thames Head Inn, where I drank cider, my usual drink in an English pub.

We drove on to Oxford, “city of dreaming spires”.  The city is compact so walking around it is easy.  We enjoyed recognising the Radcliffe Camera and the Bridge of Sighs but mainly loved soaking up the atmosphere of this university city.

Another weekend we were visited by our longtime English friend Barbara, who lives in Australia but would visit England every year to catch up with her father.  We spent a whole day driving to the Cotswolds, visiting Chipping Camden and Lower Slaughter before returning to Chasetown.  She still talks about the lunch of soup and toast, cooked on the gas stove and eaten in the shelter of a barn wall, out of the wind.

When I was about twelve years old I remember reading about Stonehenge in a National Geographic found in a doctor’s waiting room.  I decided then I had to see it for myself.  That idea was reinforced when I read “Tess of the d’Urbervilles” at high school. Imagine my delight when listening to the headset as we walked around those ancient stones to hear a quote from “Tess”.

The next pillar was isolated; others composed a trilithon; others were prostrate, their flanks forming a causeway wide enough for a carriage and it was soon obvious that they made up a forest of monoliths grouped upon the grassy expanse of the plain.  The couple advanced further into this pavilion of the night till they stood in its midst.

“It is Stonehenge!” said Clare.

Unlike Tess, we couldn’t lie on a warm, dry oblong slab and sleep until dawn as the whole of Stonehenge is fenced off from destructive visitors and we can only walk around its perimeter. John had visited in the 1960s and had the privilege of clambering all over it but obviously it was suffering from too much love and needed to be protected.

As I looked out the window of our Travel Inn in Portsmouth where we stayed that night, I could see the Isle of Wight in the distance.  Our plans to catch a ferry were thwarted by the weather as it was abysmal.  We were cheered a little when we found a non-smoking pub.

Of course, Portsmouth is of great significance to Australians as it was the departure point for the First Fleet; 11 ships crowded with prisoners, leaving on the 13th May, 1787 for Botany Bay. While there was little reference to this world-changing event in Portsmouth, we found a sculpture called “Bonds of Friendship”.  It is a chain with only two links, locked so tightly together it is inseparable.  It symbolises both friendship and bonds but I thought it also represented the chains the convicts wore around their ankles.  There is a matching one in Sydney which I made a point of finding upon my return. 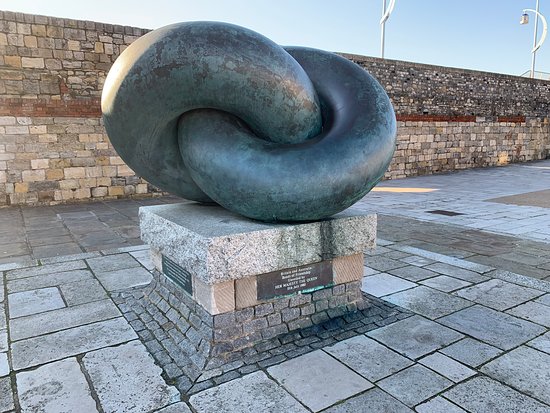 This photo of Portsmouth is courtesy of Tripadvisor

After our return from Scotland in the summer holiday we took a day trip to Chester.  What I found amazing about this beautiful city was a “dig” taking place in the town centre.  Every time a new building is constructed, the layers beneath the ground hold so much history.

It was a Roman fortress in the 1stcentury AD and you can walk around the red sandstone Roman walls which still exist today.  The Rows is a shopping district of Tudor-style half-timber buildings. Maybe that was the Roman Amphitheatre we could see being excavated on the day we were there. The River Dee flowed strongly underneath the Queen Park Bridge. So many places to see and so little time.

Tomorrow in Z we are going home. There are still places I have left out. John says, “What about Coventry, the ruined cathedral and the car museum?” but I have done enough. We are leaving England behind and flying for 24 hours across the world, back to our secure little life in Wollongong. The big adventure is nearly over.

9 thoughts on “Y for Year of Living Differently”

Join 137 other followers
Follow The Curry Apple Orchard on WordPress.com