The winters in the Illawarra are relatively mild compared to those of North America and Europe but by July the novelty of log fires, coats and scarves wears thin.  My husband likes to say, “Let’s head north until we can wear t-shirts and shorts”.  Last year it was late August before we were able to get away to Burrum Heads on the Fraser Coast of southern Queensland.

The area is named after Fraser Island which is the world’s largest sand island.  At 120 kilometres long the island features 100 freshwater lakes, rainforests, eucalyptus woodland, mangrove forests, wallum and peat swamps, sand dunes and coastal heaths.  It is the only place in the world where tall rainforest grows in sand. People take their four wheel drive cars across on the ferry to skim the smooth beaches or bounce precariously along the sandy tracks.  An eco stay at Kingfisher Bay Resort now promises royal treatment after the recent visit of the Duke and Duchess of Sussex. 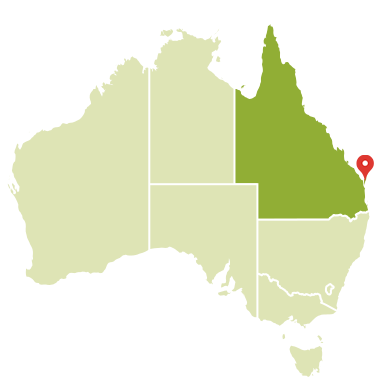 We were heading for home but decided to stay a few days on the beach at Hervey Bay, enjoying the “bright lights” after the tranquillity of Burrum Heads.  Although we had been to Fraser Island twice before there were still places we wanted to experience and I thought I had found the perfect day trip. Leaving at 7.30 am we would visit Eli Pools, the wreck of the Maheno, Indian Head and Champagne Pools.  A maximum of seven people would travel in a modern Toyota Landcruiser.  There was even champagne with lunch! Just perfect!

Of course there are many stories associated with Fraser Island.  Around 10,000 years ago it became separated from the mainland as the sea levels rose.  The Aboriginal people who lived in the area moved from mainland to island and back in bark canoes, with the population on the island swelling in the winter months as fish supplies increased.  An escaped convict in 1824 reported two to three thousand people gathered at Indian Head during the mullet season.

Fraser Island is named after James Fraser, captain of the brig Stirling Castle.  It is his wife Eliza Anne who became famous as a survivor of a shipwreck in 1836.  She had accompanied her husband on the voyage from London, and they were on their way to Singapore when the ship hit a coral reef north of the Great Sandy Island (Fraser Island).  Two lifeboats of survivors left the ship in search of the penal settlement of Moreton Bay.  They became separated and one landed on what is now Fraser Island.  Eliza gave birth to a baby which died shortly after.  The truth of what happened next will never fully be known as the story of Eliza has become folklore, turned into books, plays, paintings and musical compositions.

In the Australian dictionary of Biography Elaine Brown tells Eliza’s story, The Aborigines divided the men among family groups to assist with hunting, fishing and gathering firewood. Aboriginal women cleansed Eliza’s sunburned body with sand, rubbed it with charcoal and grease and decorated it with colour and feathers. She was required to nurse their children, dig fern roots and rob bees’ nests, but was so inept and resentful that the women tormented her.

Finally rescued, Eliza was feted in Sydney as she told of her mistreatment by the natives. Questions surrounding her rescue and its aftermath led to lasting controversy. Descendants of those Aboriginal people resented the way their ancestors’ attempts to help the castaways were misrepresented.  It was felt that subsequent massacres of Aboriginal people were fuelled by the exaggeration of Eliza’s accounts.  It appears Eliza not only told fibs but double dipped, marrying in Sydney and receiving generous compensation and then appearing in London as a distraught widow, becoming the beneficiary of another appeal.

Back to the present. We were picked up at the front of our caravan park by Fritz, who originally came from Austria. Two couples were already in the car, from Holland and Germany.  We headed south to River Heads where we boarded a ferry which unloaded us at Wanggoolba Creek on the island.

There were two Landcruisers so we climbed into one, following deeply grooved tracks until we reached the eastern side of the island.  Cruising along 75 Mile Beach we stopped at the wreck of the Maheno for morning coffee.

Built in 1905, the SS Maheno was one of the first turbine-driven steamers. She plied a regular route between Sydney and Auckland until she was commissioned as a hospital ship in Europe during World War One. She also served in the Mediterranean and the Red Sea.  In 1935, she was sold to Japan for scrap.

Her  rudder was removed and she was being towed to Japan. In Queensland waters, a cyclonic storm snapped the tow chain and the Maheno drifted helplessly onto Fraser Island’s Ocean Beach.

There she lay, slowly rusting away.  However she has not been ignored.  In 1936, during salvage operations the customs officer Dudley Weatherley married Beatrice McLean of Townsville.  On a deck pitched at 16 degrees, the nuptials were sealed to the sound of crashing waves and the ship’s organ. In World War Two it was used for bombing practice which accelerated  its decline. More than 200,000 people visit the wreck each year and usually pose in front of the rusting frame with the white sand and blue sea providing a vivid photograph.

The next stop was Indian Head which, after a steep climb, gave us good views to the North and South.  Captain Cook named it after the Aboriginal people he saw assembled there as “Indian” was a term commonly used in those days to describe indigenous people from many countries.

I was really looking forward to experiencing the Champagne Pools.  They lived up to their name.  As the waves broke over the rocks the water fizzed like champagne.  Although the water was bracing it was great fun swimming in the deeper holes.

After a lunch eaten in the shade of rocky cliffs we returned to Eli Creek.  It is the largest freshwater stream on the island with over four million litres of water flowing from its mouth onto the beach and ocean each hour.  The shallow water with clear sandy bottom is perfect for wading “up the creek”and floating back down again.

Our last stop was Lake McKenzie.  It was a rough ride as it was our turn to sit in the cramped 3rd row of seats.  The shadows were long and the lake was empty of people but I wasn’t going to miss a chance to swim in the amazing water.

The Butchulla people believe that K’gari Island, (Fraser Island), was created when the goddess K’gari was transformed into the land. Lake McKenzie, or Boorangoora, was said to be one of her eyes. This is one explanation for the beautiful clarity and blue color of the water. A more scientific explanation is that the high acidity levels of the water make it difficult for any organic matter to survive, though there are Fraser Island Short-Necked turtles and fish that swim around the reeds. Wild Swimming Australia

The sun was setting as we walked onto the ferry for the return journey.  What a truly magical place.

11 thoughts on “F for Fraser Island”