Before we owned a caravan we would take our two children on road trips, staying in caravans or cabins in caravan parks. Squashed in the back seat, with an Esky between them, they travelled through NSW, Victoria and Queensland, soaking up the history of the countryside and visiting many “dead and dying towns” as our son called them.

Echuca was not dead or dying when we visited but had history oozing out of every corner.  Perched on the edge of the Murray River with a multi level 400 metre long redgum wharf built to withstand the varying heights of the river, it was host to a number of restored paddle steamers chuffing up and down the river. Wool, wheat, other grains, livestock and timber were the most common cargoes in its heyday. This industrial boom led to a rapidly expanding population, at one stage in excess of 15,000, with more than a hundred pubs (hotels) rumoured to exist in the Echuca district at one time.

The whole family was excited to be there because it was the setting of the TV mini series, All the Rivers Run based on the book of the same name by Nancy Cato.  The paddle steamer Pevensey was used in the filming of the show.

In the book the irrepressible Philadelphia Gordon lives on the banks of the Murray River with her family.  She watches the paddle steamers as they ply the river.  Eventually she owns a share in the PS Philadelphia and becomes the captain when her husband has a stroke after a diving accident.  She witnesses the marooned boats when the river levels become too low,  the building of the locks allowing boats to navigate the river in all seasons and the coming of the railways which resulted in the eventual failure of the river boat trade.

An extract from my diary of 1990 recalls the town nearly 30 years ago.

We began at the Star Hotel where we bought tickets entitling us to a tour of the Star Hotel, the Wharf area and the upstairs of the Bridge Hotel.  I tried to get tickets for the “Pevensey” but she wasn’t running until Saturday. 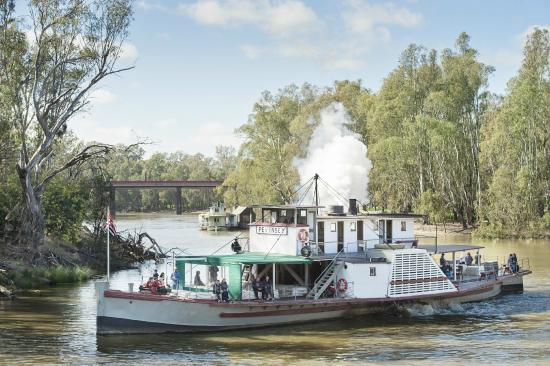 This photo of Echuca Paddlesteamers is courtesy of TripAdvisor

The Adelaide was doing a demonstration of towing a barge of logs instead.  Before taking our tour we bought tickets for an hour long river trip on the “PS Canberra” which although originally a paddlesteamer now runs on diesel.  We took about a dozen photos of the paddlesteamers, “Adelaide”, “Pevensey”,  “Emmy Lou” and “Pride of the Murray” as well as lots of little houseboats.

Everyone was starving on the return journey so we repaired to a riverside restaurant for Devonshire Tea – fantastic views from picture windows of the Murray and river boats.

The wharf itself was really something.  The lower levels were covered with water as the Murray is in flood.  The old disused railway station is still there with a train parked in front.  The “PS Pevensey” is moored at the wharf and is open for inspection.

How delightful it was, sitting in Oscar W’s (I later found its name), eating scones with jam and cream and looking out over the river traffic. Unfortunately it has now closed as a result of a protracted dispute over redevelopment of the site. The retaining wall needs rebuilding and the empty restaurant is deteriorating.  The last article I read said that the building was to be demolished as it had no heritage value.  It was only 31 years old even though it appeared much older, with its timber beams and corrugated iron.

In 2017 we stopped there again, this time in our Lotus,  seeking out a free camp by the river.  The Rotary Park had a donation box, some locked toilets and steep banks to the Campaspe River which joins the Murray but we are self contained so it was not a problem.  A tour of the old part of Echuca unearthed the signs of change.   A $14 entry fee gives access to  the Discovery Centre, Evan’s Sawmill, a Steam Display, Echuca Wharf, the Cargo Shed Museum and a Rail Siding with Vans but it was closed off from general public.

The euphoria I felt on my first visit was diminished.   The restaurant will become a grassed area with a pop up park and there will hopefully be uninterrupted views of the paddle steamers on the river.

As Philadelphia cried in her mind, Time, flow softly, but it doesn’t does it? We are all caught in a current that is relentlessly speeding up. There is no way of arresting that endless flow. (inspired by Time, Flow Softly by Nancy Cato)

One thought on “E for Echuca”