I’m sitting in the courtyard of 15 Monument Street with a selection of snacks and an orange juice. John is bringing a glass of wine as soon as he catches up on the latest news on TV. It is warm with a light breeze at the end of a mainly successful day. We had a bit of a slow start because our trolley bus failed to appear at the Constitution Museum. Other buses, red, orange and green, green and yellow turned up but not our silver one. So we walked across the bridge. This was an eye opener as the walking path actually zig zags across the locks and through a park.

We waited another 15 minutes at the next stop but still no trolley so we set off on the Freedom Trail looking at graveyards, churches and Paul Revere’s house. (Didn’t go in because John said he already knew what it would look like). Paul Revere was a very talented man who was a silversmith, artist, false teeth maker, spy and producer of 18 children with two wives. What he did not do was complete the ride he is famous for. He was captured by the British and one of his companions, a Dr Prescott went on to warn the militia in Concord.

Our aim was to find the perfect flat white in Boston. I had read a review of Pavement in Newbury Street which featured photos of their flat whites so thought that a worthy object for our endeavours today. We finally picked up a silver trolley which took us to the Boston Common. Here we watched people in paddle boats with a huge swan in the front, inspired by the opera Lohengrin in 1877. We were amused by the preschoolers all tied together walking around the park.

On to Newbury Street and the Back Bay area. The street is lined with tall brownstone buildings, the lower levels used for coffee shops, restaurants, art galleries and all sorts of interesting clothing and related shops.

Just as we were about to give up we found Pavement and the coffee and muffin lived up to the recommendations. Back we walked past Trinity Church and the Boston Public Library where Chinese women were protesting over prisoners being used for organ donations (against their will). We stopped for a chat.

We decided to buy lunch in Quincy Market and chose lobster rolls from the Boston and Maine Fish Company. The lobster was very good. Maybe the rolls could have been better.

Our two day pass on the trolley also entitled us to a harbour cruise so we opted to take this as the weather was perfect and John’s foot needed a rest. It was very interesting as it followed the shoreline closely on the starboard side and gave us a new perspective. 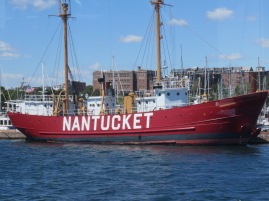 We bought some food to cook for dinner and enjoyed the sun in the courtyard until John reminded me about the seating on the flight home. I had tried to prebook seats for the LA to Sydney leg on the Qantas site but ended up with seats in two different rows. I could do nothing to change them so had to ring an 1800 number. Now it’s all sorted and we can spend the 15 hour flight in misery together.

Some days everything goes right … until the end. The taxi took us to the airport car hire centre Avis was very efficient and soon John was driving south in our red Ford Focus through the tunnel out of Boston. Our sat nav worked beautifully but I didn’t put it on until we were out of the tunnels as it is over three years old and could have caused confusion. The weather was glorious and it was lovely to be out in the countryside again. 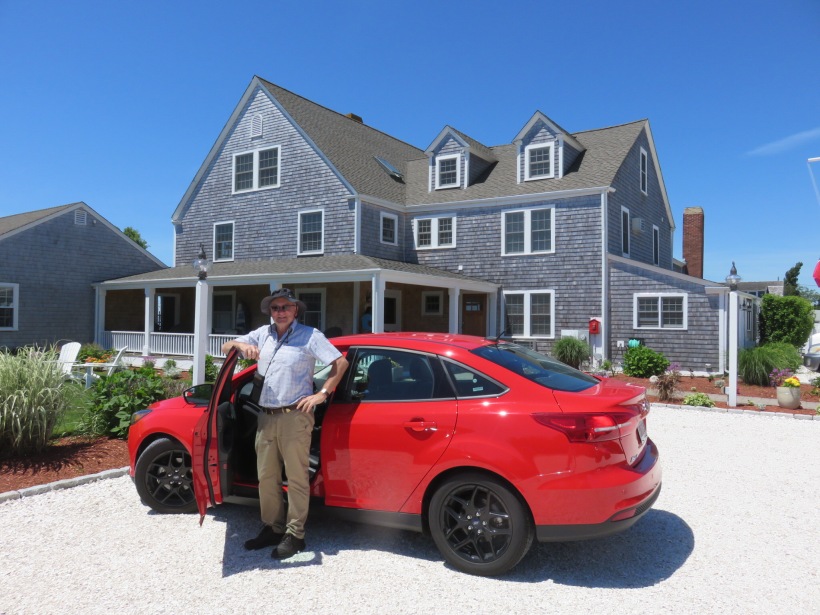 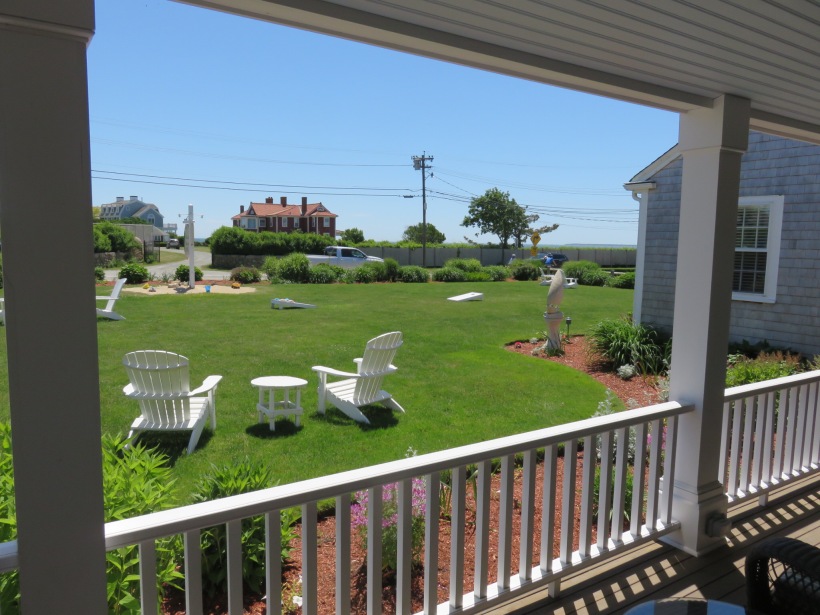 Falmouth was larger than expected. It is full of picture postcard Cape Cod houses. It is unusual to see an ugly one. We were expecting a sleepy seaside village but the traffic is thick. Our Beach Breeze Inn is a short walk from the beach. It is not like a Wollongong beach but then few places in the world are.  The manager raised the Australian flag (to half mast) shortly after we arrived.  We have been made to feel very welcome.

I almost matched John’s passport fiasco but losing my Qantas prepaid card. I found out eventually that I had left it in the ATM when I took out the balance so it was not a disaster to lose it. The bank is considering whether to cut it up or give it back to me. Hopefully I will get it back tomorrow.
Dinner tonight was at the Quarterdeck. We had a carafe of red wine and a seafood pie (John) and prawns and scallops with linguine (me). There was no room for dessert but back at the inn the s’mores were being cooked by the pool. Having not tried them before I found I had to toast a marshmallow on the fire and place it between two graham crackers with a piece of chocolate. I don’t think I will have it again but we had a pleasant conversation with some families at the fireside.

We were both asleep when we heard knocking on our door. One of the managers told us our car horn was going off for no reason. After a lot of messing around the problem was still not solved. 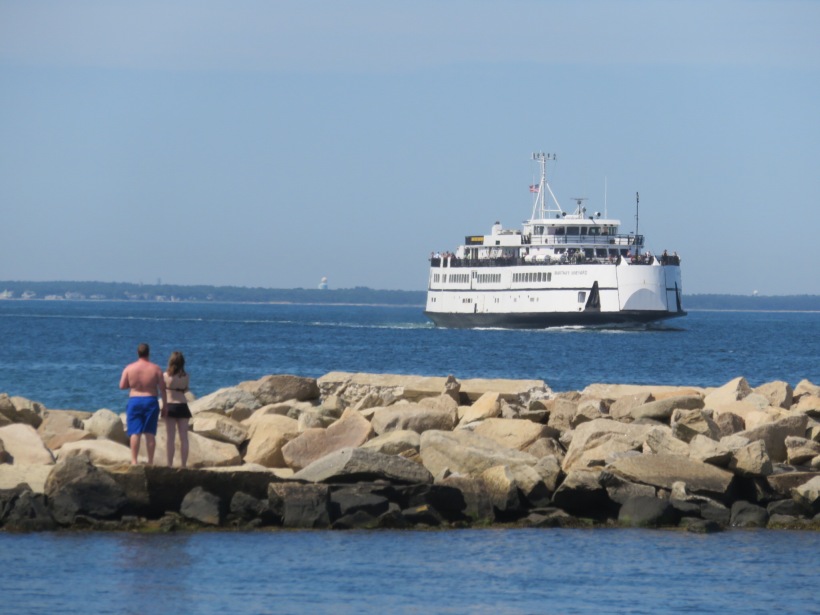 John fixed the car problem this morning. Apparently the hood was not completely shut so that set off the horn at irregular intervals. 10.30 saw us on the Island Queen heading for Martha’s Vineyard. 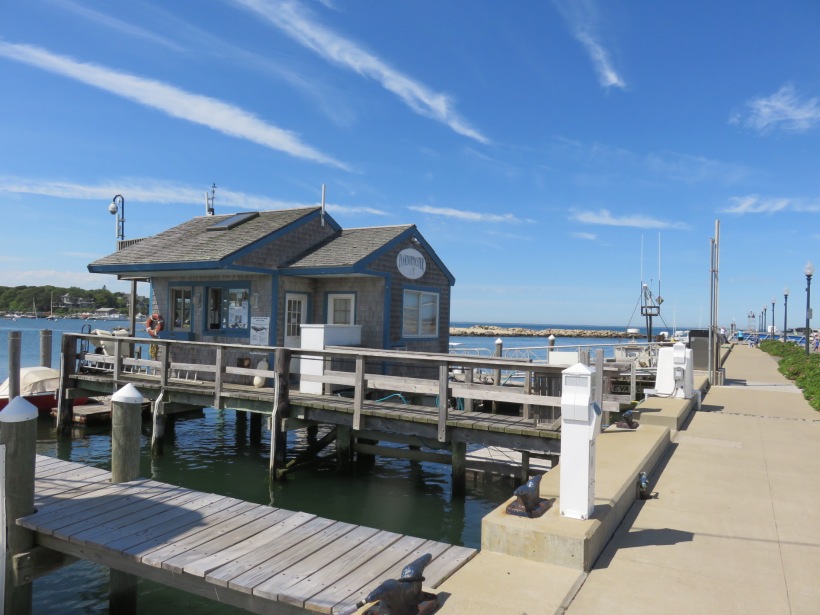 We found that the island is famous for a number of things. It is the setting for the movie “Jaws” and on our bus trip we saw the lagoon where Jaws came under the bridge and “had a snack”. It is also where Edward Kennedy drove off the bridge in Chappaquiddick resulting in the death of Mary Jo Kopechne. We watched the car ferry travel across to Chappaquiddick from Edgartown. Now that was a discovery. After wandering around Oak Bluffs where the boat docked, having coffee and brunch, we debated whether to hire bikes, catch a local bus or catch a ferry back to Falmouth. 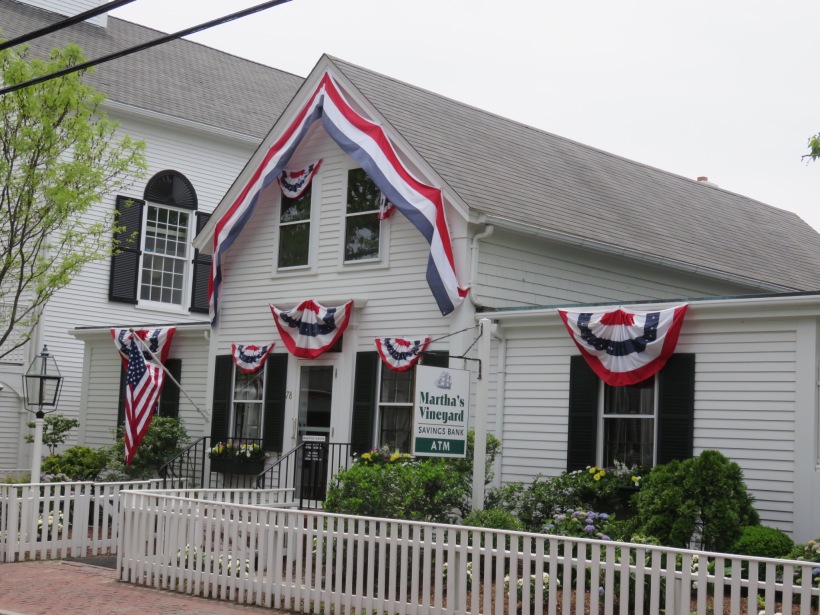 We decided on a day ticket on the local bus which led us to Edgartown. It is supposed to be the most beautiful town in New England and I can quite well believe it. If only I could take one of those houses home! Everything is picture postcard perfect, from the retired captain’s houses to the grand churches and festive post office, all built from weatherboard.

Back at the Inn John went for a swim in the pool and I discovered that my swimmers were missing. I must have left them on the ship. I am not doing very well today. I drank a glass of wine by the pool before we drove up the street to La Cucina. John had prawns and scallops with angel hair pasta. I had lobster filled ravioli with a scallop sauce. Before the main course we shared a salad. It was so huge we had half put in a doggy bag for tomorrow’s lunch. When we went to take the remains of the wine home we were told that to do that it must be recorked, wrapped in brown paper and have the bill attached. I suppose that is to stop us taking a swig as we walk down the street.

3 thoughts on “The Beach Breeze Inn”